Each year, ULI Chicago’s Jeffrey Kahan Fellowship recipients attend the ULI Fall and Spring Meetings, gaining valuable insights from the senior CRE players who convene semi-annually to attend their US Product Council meetings. Here’s what our 2018-19 Kahan Fellows who recently attended the 2019 ULI Spring Meeting in Nashville have to say about their experience:

The ULI Spring Meeting in Nashville showed me that there’s more to The Music City than meets the eye.

Bike the Boom
On Tuesday morning, I joined ULI members from across the US and Canada for a four-hour “Bike the Boom” tour. After departing from the Music City Center, we rode through The Gulch. The first LEED-certified neighborhood in the South, The Gulch has risen out of an abandoned industrial area into a vibrant cluster of hotels, residential buildings, shopping, restaurants, and (of course) music venues.  Guided by Nora Kern of Walk/Bike Nashville and Peter Bird of the Metropolitan Government of Nashville & Davidson County, we then cruised through The Nations, which is still in the early stages of revitalization; Hadley Park, home of HBCU Tennessee State University; and Midtown’s Centennial Park and Vanderbilt University.

Vanderbilt
Vanderbilt also hosted its own Spring Meeting tour, where we learned about their future plans for the campus and also the University’s relationship to the surrounding city. In a master planning effort still underway, Vanderbilt has recognized that it needs to shift away from a car-centric design if they are to retain the arboretum-like feel that ranks them among the most beautiful campuses in the country. With a goal of to reduce the number of people who drive alone to campus from 69 percent to 47 percent, they’re likely to be exploring strategies like improved campus shuttles, parking permit buy-outs, and other financial incentives for carpooling and transit use, along with their planned “walk and roll” greenway. A similar “park once” mentality was advocated for in the nearby ONEC1TY, a 19-acre development drawing on the strength of Vanderbilt’s medical center. Inspired by its owners experiences in the healthcare industry, ONEC1TY has been honored by ULI Nashville with its Excellence in Development – Building Healthy Places award. After the very public failure of a Nashville referendum to fund transit infrastructure in 2018, I was happy to see influential groups and developers in Nashville still championing active transportation—and with an average of 100 new residents a day in Nashville, the city will need to focus on a diversified transportation landscape to support their continued growth and success.

IOPC on Music Row
My time at the Spring Meeting ended with our Council Day, and the Industrial & Office Park Development Council – Blue Flight went full Nashville by meeting in a recording studio on Music Row! The day included enlightening conversations about Opportunity Zones, multi-story warehousing development, and real deals in Midtown Atlanta and Playa Vista Los Angeles. Panattoni treated us to a tour of Music Row to witness their role in its vertical rise as more music industry players are growing and seeking modern office space. We ended the day on the rooftop at 35 Music Square East with cocktails and barbeque, looking over Nashville’s ever-changing skyline. 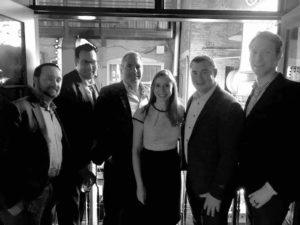 I recently had the opportunity to attend ULI’s National Spring Meeting in Nashville as a ULI Chicago Kahan Fellow. Similar to the Fall Meeting, I enjoyed getting to know many people from diverse aspects of real estate who are also passionate about real estate.

Vanderbilt and Sustainable Growth
Since this was my first time to Nashville, I joined the ULI tour, “Vanderbilt and Its Neighbors: A Connected Plan for Sustainable Growth,” where I learned about Vanderbilt’s real estate plans, Centennial Park’s transformation over the years, and the new mixed-use development One C1ty. Vanderbilt’s real estate department is focused on making changes to their real estate to improve the connectivity of various departments to increase collaboration to enhance student learning. While touring Centennial Park, we learned about Nashville’s recent efforts to enhance the park by organizing events along the perimeter of the park to keep the park’s green spaces from getting too worn. We learned from the developers of one C1ty that their vision is to create an innovative atmosphere by bringing together individuals in tech and healthcare through offices, community meeting spaces, retail, and residences. These three places are being transformed by individuals who are working toward realizing their vision of a better Nashville.

IOPC-Blue
As with the Fall Meeting, I attended the Industrial & Office Park Development Council – Blue Flight Council Day, where it was again a privilege to participate in a curated conversation on various topics relevant to the investment world. I found the candor of the group to be especially helpful as the room discussed opportunity zones, debt capital markets, and equity capital markets for industrial and office. Several guests presented case studies that provided the council with insights on strategies and new technologies. I found it especially helpful to hear others summarize the vision for a project, how a deal came together, how value was created, and lessons learned.

I appreciate having the opportunity to expedite my involvement in ULI through the Kahan Fellowship. The connections I made through getting to know other attendees and the valuable insights I gained as a guest on the IOPC- Blue for the fall and spring meetings are helpful to me in my investment career, and I hope to stay involved in national ULI events.